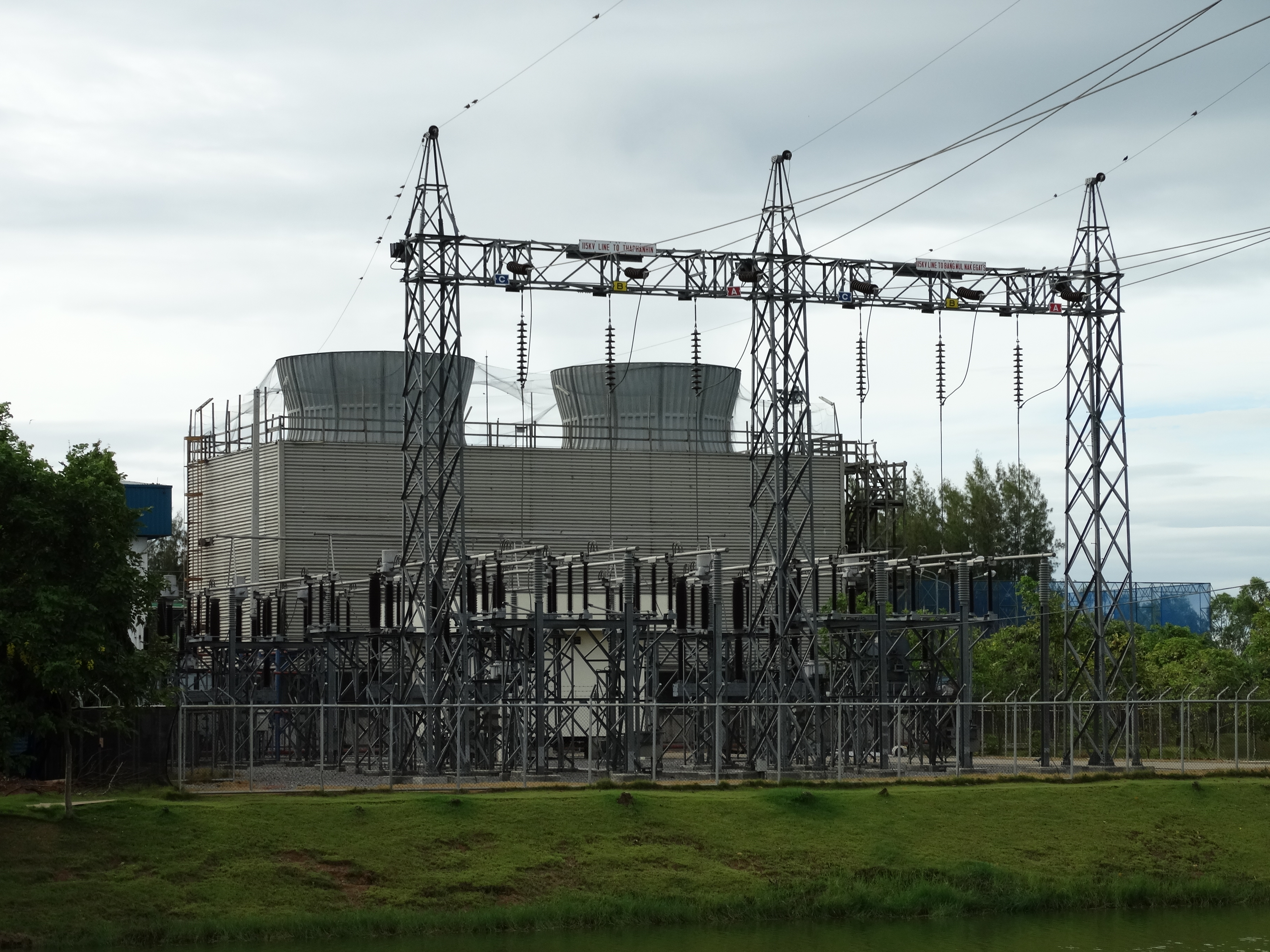 The principle or generation process of a rice husk power plant is similar to that of a general thermal power plant.The generation process starts by continuous handling of rice husks from a rice husk storage yard to an indoor storage and subsequently to a grinder, a silo and the furnace chamber of a boiler in respective orders of power generation as shown in Figure 2.3-1and Figure 2.3-2.Rice husks will be burned and the resulting thermal energy will be used to boil water to generate steam. The resultant steam will be sent to move the turbines of a generator to generate electricity while the steam which has passed the electricity generation process will be cooled down by a condenser as condensates.These condensates are collected and transported by a boiler feed pump to be used as feed water for the boiler to regenerate steam. Meanwhile, cooling water used for condensing steam, which now has become hotter due to heat transfer will be cooled  down in a cooling tower to remove heat from the cooling water into the atmosphere.The cooling water which by now has become cooler will be reused. This cooling water system is thus a closed circuit system

A.T.Biopower Company Limited has selected suspension - fired combustion technology which provides high efficiency in combustion, resulting in economy in fuel consumption for power generation and better control of consistent quality of ash which is a by - product so that ash with more quality benefits is produced.

Generally, in a suspension - fired combustion system, the boiler furnace is designed for use with solid fuel, but employing the principle of liquid fuel combustion such as natural gas and oil . Combustion of liquid fuel occurs when the fuel flows upwards into the air which is achieved by the force of a fuel pump. This pump will atomize the liquid fuel from a burner in the form of mist or spray . When the atomized liquid fuel comes in contact with the heat in the furnace, it will ignite as a flame in the air or become burned in the air.

A distinct example in applying a suspension - fired combustion system for use with solid fuel can be found in a pulverized coal burner, which is one of the forms of a suspension-fired system . But in general, this type of combustion has a specific name in accordance with the type of furnace used for combustion . In the example, the furnace is called a pulverized coal boiler . Its operation principle is based on pulverization of coal . Transport air is used as a means to transport pulverized coal and at the same time is utilized as combustion air . Excess air will be added to ensure a more complete combustion. Pulverized coal which is injected from the burner is thus burned during it suspends in the air.

The suspension-fired combustion burners used in the power plant of A.T.

Biopower Company Limited is also based on the same principle. That is to say, rice husks are ground by a grinding machine so that the finely ground rice husks in small fragments will have increased surface areas for combustion, resulting in rapid combustion and at the same time have lighter weight suitable for being transported by the transport air. Therefore, when these ground rice husks are injected through the burner, major quantities of rice husks will be burned during subject to suspension - fired combustion in the furnace while light-weight fly ash which occurs in the combustion will be blown away by air pressure.

However, as the combustion rate of rice husks is much slower than that of coal, some portions of rice husks with larger particles which have not yet burned completely will fall onto a grating plate at the bottom of the furnace and are subject to further combustion to become bottom ash wherein the grating plate serves to control the amount of un-burnt carbon in the bottom ash by adjusting the time in tilting these grating plates to extend or shorten combustion time . When the grating plate is tilted, bottom ash will fall down and is swept out of the suspension - fired combustion system by a screw conveyor . In respect of combustion of rice husk fuel in a suspension - fired furnace, there is no preheating of fuel while hot air will serve as transport air to transfer heat to fuel in a short period of time before it is sent to the furnace . Another reason why there is no preheating of fuel is due to the special properties of rice husks . Even though they are piled outside a facility and directly subject to the influence of heavy rain, rain water can only penetrate up to 2 centimeters while the moisture content of is only averaged around 9-10%.

Suspension-fired combustion furnaces employing agricultural residues have never been used in Thailand before . Furnaces which are widely used in Thailand include stroker combustion or fluidized bed combustion systems. For example, in general sugar factories which use bagasse as fuel, stoker furnaces are mainly employed or in rice mills which use rice husks to generate power in their factories, both stoker or fluidized bed furnaces are frequently employed. Suspension - fired combustion by employing rice husks as fuel is not much used because it is based on expensive technology when compared with other types of combustion. However, this type of combustion has been used more than 20 years, particularly in North America . For example, Agrilectric Power plant has used this type of furnace under the US environmental laws and at present there are several power plants being constructed based on this technology in South America and Australia as details shown in Table 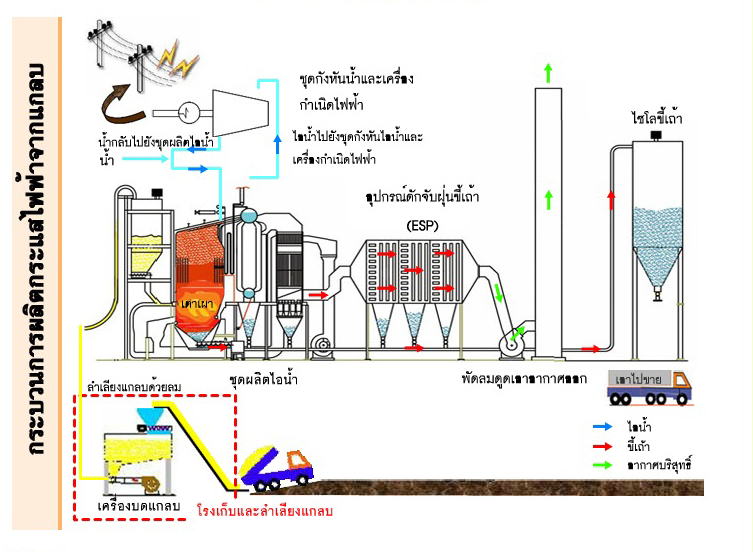 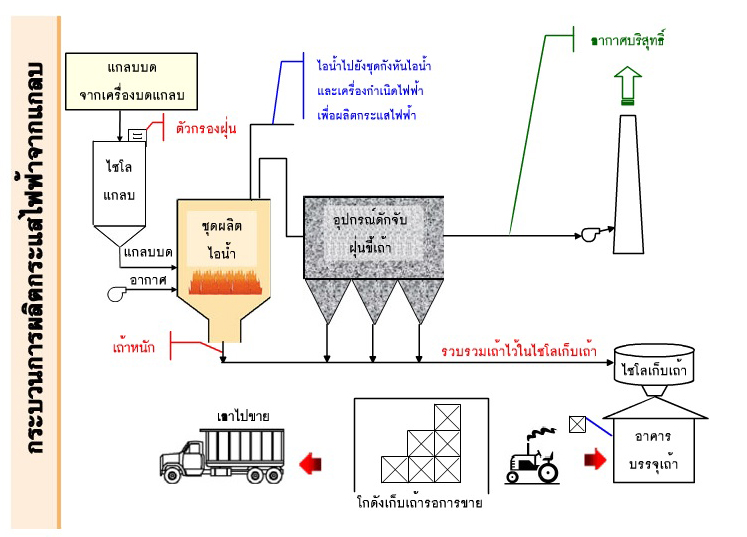